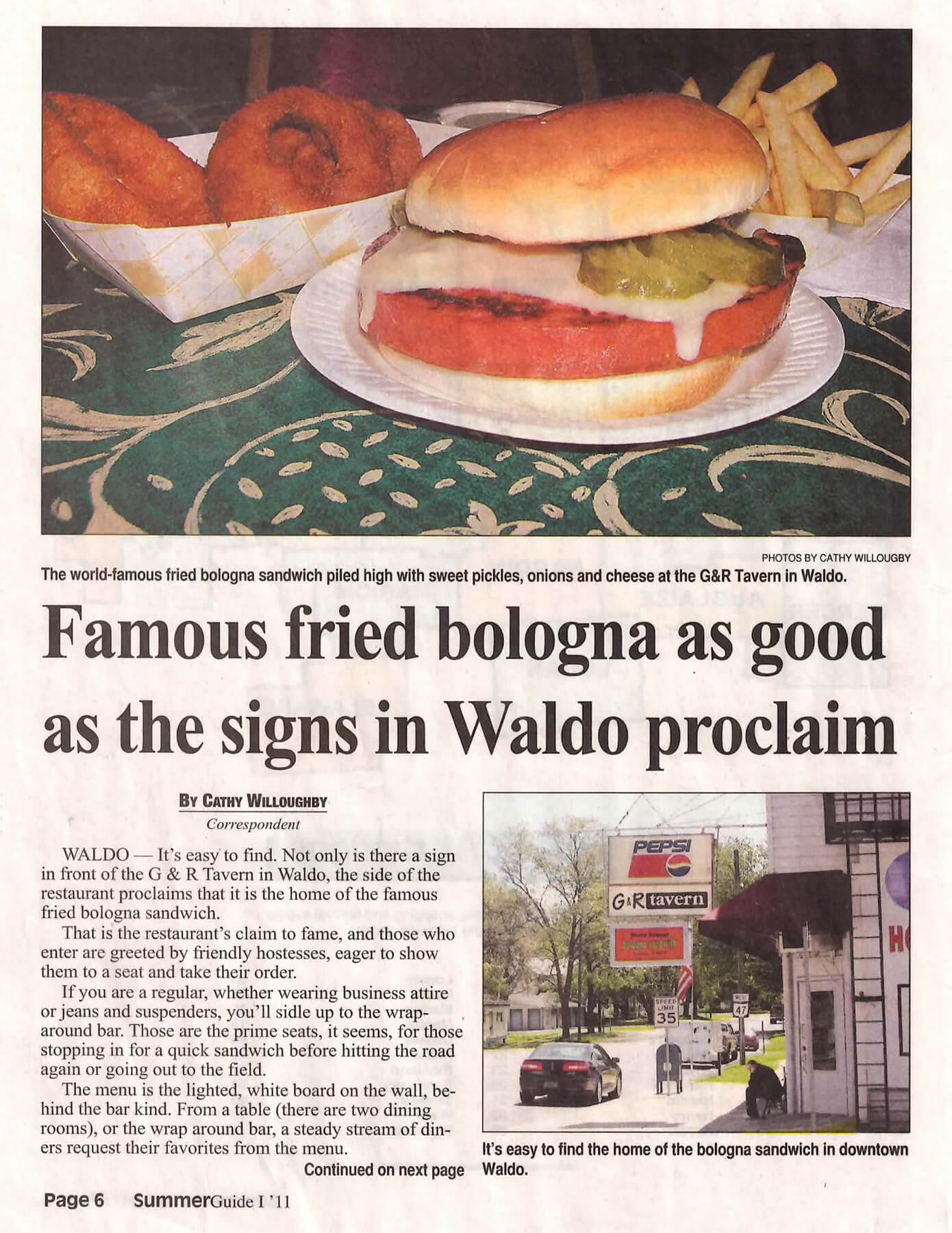 Rank all the world’s meat products in order of prestige, and bologna would occupy the spot between canned sausage and pre-sliced Shop ‘N Save ham, which is to say, in the company of the maligned and ridiculed.

Even a homophone of the word bologna is a term of derision — “That’s baloney,” you might say, possibly in response to the question, “Bologna’s your favorite lunchmeat, right?”

Leave it to Waldo, Ohio, a 45-minute drive north of Columbus, to turn a punch line into an economic engine. Bologna has, in fact, turned this town of 350 into a curious and worthy pit stop in central Ohio. The town owes its relative fame to G&R Tavern, which for 50 years has fought the good fight of elevating bologna’s humble status into something nobler.

Its reputation has been sanctified by roadfood.com, the authoritative website recommending small-town restaurants and dishes. It has affixed its highest status upon G&R, rating it: “Legendary — worth driving from anyplace.”

For at least its first quarter-century, G&R Tavern (named for founders George Yake and Roy Klingel) lived up to the tavern end of its name, its reputation more watering hole than place to bring the kids. The year 1985 brought new ownership — Joy and Bernie Lewis, who frequented G&R growing up. When they took over, the trio decided to steer the tavern into more of a family restaurant, the type of place where peanut butter-chocolate cream pies are made each morning and placed in display fridges to tempt customers. They rounded out the menu with pizza, salads and fried seafood baskets.

These days, G&R Tavern, which celebrated its 50th anniversary June 1, still bears the hallmarks of a neighborhood sports bar, with the requisite beer paraphernalia and local team trophies along walls. (Waldo, equidistant between Cleveland and Cincinnati, tends to side with the former, showing more visible support for the Indians and Browns.) ESPN plays overhead on flat-screen televisions, perhaps the one visible upgrade from the George and Roy days. What remains is the faded plastic lettering tacked to the menu board.

And, of course: the bologna. Joy Lewis emerged from the walk-in cooler with the 16-pound beef-and-pork logs (the restaurant’s proprietary recipe), looking like SWAT team equipment with its ability to knock down doors. Eventually this is transformed into a number of dishes, such as an appetizer of chopped bologna and mayonnaise. It tastes like a less-boring ham salad.

As food gimmicks go, it’s a novel one, their attempt to redefine a negative (for many) school cafeteria memory. (Columbus Dispatch columnist Mike Harden called bologna “the Rodney Dangerfield of the deli case.”) Consider its reputation as a drab cold cut — emphasis on cold, which congeals fat and accounts for its slippery texture. But thick bologna fried hot on the griddle forms an appealing crust, one that seems to amplify its smoked and savory properties, rousing its inner garlic to the forefront.

This is how it’s served here, crisp and hot, thick as a full deck of playing cards, with Monterey Jack cheese melted to a sheen. Toppings are simple: raw onions for bite and crunch, and cool-to-the-touch pickles. It’s the unassuming pickles that are the real secret, as satisfying a sweet counterpoint as cranberry sauce is on turkey. Everything is sandwiched between soft hamburger buns and delivered on a foam plate. For this they ask $3.75 — cash only, no plastic.